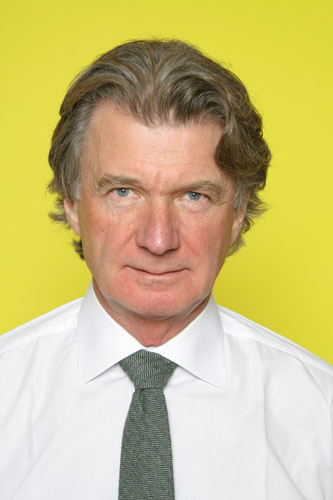 Anders Wijkman (born 30 September 1944 in Stockholm) is a Swedish opinion leader and author. Since 2012 he is co-president – together with Professor Ernst von Weizsäcker – of the global think tank Club of Rome. In 2017 he was appointed chairman of the Governing Board of Climate-KIC – a major public-private partnership at EU level for the promotion of innovation of a low-carbon society. Since 2015 Anders is a member of the International Resource Panel (IRP) – a UN appointed expert body ”to build and share the knowledge needed to improve the use of our resources worldwide”. The Panel´s goal is to steer us away from overconsumption, waste and ecological harm to a more prosperous and sustainable future.

Being active in student politics, Anders was elected to the Swedish Parliament already at the age of 26. During altogether eight years of membership, Wijkman gave priority to issues like privacy legislation, energy security and development cooperation. He left politics in 1978 to become the Secretary General of the Swedish Red Cross.

Deeply troubled by the African famine in the 1980´s, Wijkman initiated a major research project within the Red Cross focusing on the major causes of the rapid increase in the number of natural disasters. A primary purpose was to explore what could be done to prevent and/or improve resilience to disasters like heavy storms, floods and famines among the poor. A landmark study in 1984 – ”Prevention better than cure” – argued strongly in favour of disaster preparedness and prevention. Anders wrote a book with Lloyd Timberlake based on the study by the title ”Natural disasters – acts of God or acts of man?” The book was translated into several languages.

During Anders tenure the Swedish Red Cross launched many new intiatives; among them a Center for the Rehabilitation of Victims of Torture, a Center for HIV/Aids Prevention (Noah´s Arch) as well as major disaster prevention programs in East Africa. During 1981 to 1989 Wijkman was president of the International Red Cross Disaster Relief Commission.

Leaving the Red Cross Wijkman served as Secretary General for the Swedish Society for Nature Conservation. He was actively involved in the world-wide NGO preparations for the Rio Summit in 1992. During his tenure major programs were launched to address the shortcomings of markets when it comes to pollution prevention, resource depletion and the protection of biodiversity and vital ecosystems.

In 1992 Anders was appointed Director General of SAREC – the Swedish Agency for Research Cooperation with Developing Countries. SAREC was providing support to research capacity building in some twenty developing countries.

During the period 1995-97 Anders served as Policy Director of the United Nations Development Program (UNDP) and Assistant Secretary General of the UN. During his tenure several important new programs were launched by UNDP, such as Information Technology for Development and Energy Access to the Poor.

In 1999 Anders was elected member of the European Parliament. As member of the EP, he focused on issues related to climate change, energy policy, environment and health, development cooperation and humanitarian affairs. Wijkman was the EP´s rapporteur on a number of important topics, like HIV/Aids Prevention, the Development Cooperation Budget, Renewable Energy in Developing Countries, the Energy Efficiency Action Plan, Integrated Product Policy(a precursor to the Circular Economy Package), Climate Change Mitigation and Sustainability Criteria for Biofuels. During his tenure Anders was awarded ”the Achiever of the Year” by the European Parliament Magazine(2005). He also received a special award by EREF, the European Renewable Energy Federation, for his efforts to promote renewable energy within the EU.

After his tenure in the European Parliament Anders has been assigned several chairmanships of major government task forces in Sweden, such as an inquiry into the Public Procurement legislation and a long-term climate strategy. The latter strategy lead to the adoption of a climate act in the Swedish Parliament in June 2017.

Parallel to the chairing of government task forces Anders has been busy writing books and reports pertaining to sustainability issues. ”Den stora förnekelsen” (”The Big Denial”) was co-authored with Professor Johan Rockström in 2011. One of the main messages of the book was that an economic model, i e the present one, that treats biodiversity and natural capital – including the atmosphere – as more or less as a constant will not survive. In 2012 the book – including some additional content – was translated into English, under the title ”Bankrupting Nature”(published by Routledge). One of the new chapters dealt with the unsustainabilitiy of the financial sector. The book was launched as a report to the Club of Rome.

In 2015 Anders – with co-author Kristian Skånberg – published a report on the Circular Economy, with a focus on the societal benefits by moving towards a more circular economy. The main findings were that the benefits in terms of lower carbon emissions and new jobs would be significant. Altogether eight European economies were analysed – the Check Republic, Finland, France, the Netherlands, Norway, Poland, Spain and Sweden. Translations were made into five languages.

In 2017 Anders – with co-author Ernst von Weizsäcker – published ”Come On – Capitalism, Short-termism, Population and the Dertsuction of the Planet”. The book was published by Springer. The book has already been translated and succesfully published in Germany (”Wir sin dran”). Transaltions into Chinese, Italian, Spanish, Russian, Polish and Ukrainian are being planned for.

The book is prepared for the 50th Anniversary in 2018 of the Club of Rome. It is a follow-up to the Club of Rome’s landmark report “The Limits to Growth”, published in 1972 and sold more than thirty million copies.
Among the main messages is a quest for a New Enlightenment, doing away with the reductionistic approach that is dominating science – and society – and paving the way for a better balance between man and nature, short term and long term, private consumption and public goods etc The book also make the point that we cannot have the same economic model in a Full World – soon to be 8 Billion people – as in an Empty World – which was the case when the economic philosophy still guiding us was established.